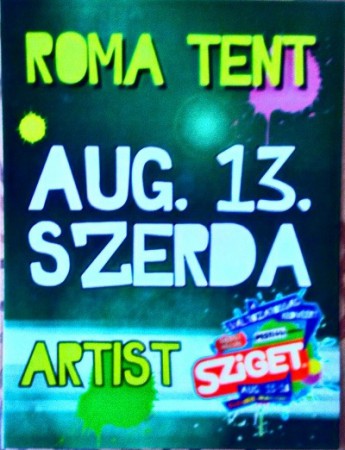 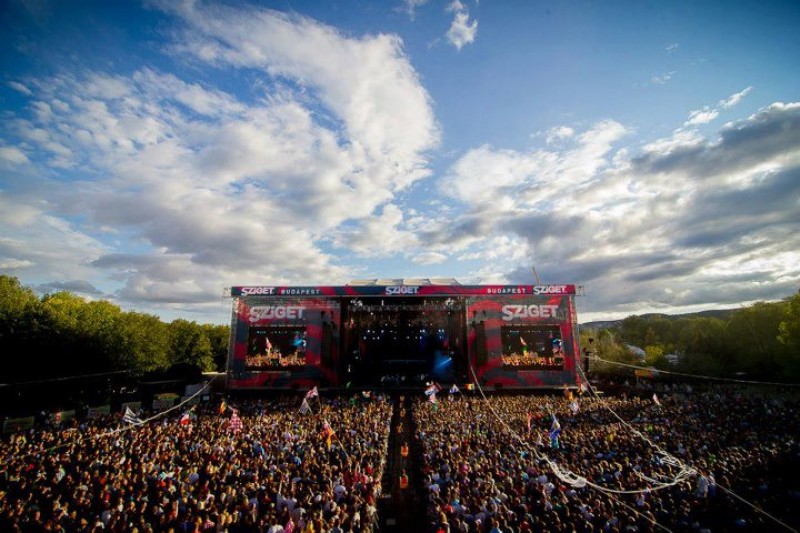 We were impressed by the energetic performance of Kesaj Tchave Roma from Slovakia. Under the leadership of Ivan Akimov they captivated the spectators with traditional dances and songs.
Folk newspaper portal Slovaks in Hungary, August 2008

Since 1993 the Sziget Festival has become a symbol of diverse entertainment, and an unforgettable cultural excursion. Today Sziget is also a strong cultural brand gaining an admirable position on the international festival market. This year our favorite festival starts out on 11 August with the Day of Hungarian Songs, on the next day, Day Zero, Sziget presents the Iron Maiden, then the festival gets in full gear from 13 to 18 August offering the usual variety of 60 locations with 200 daily programs.

Compared to other festivals abroad Sziget is also one of the top festivals in Europe spreading the word about what Hungary and its capital can offer. It has not been subsidized by the state for two years, while producing a profit of HUF 1,5 billion for the country in addition to having significant impact on tourism and other areas of the economy. Sziget has also played a part in bringing unique cultural values and exciting programs to the people of the region. Despite its significance and cultural mission there have always been voices trying to silence the festival, claiming that it’s too loud, while others complain about the prices. For the first, group there are good news: the festival will be two days shorter and a new sound-proof technology is being applied this year further reducing our “noise emission” that is hardly audible in the noise of the neighboring districts.

It is the meeting place for fans of passionate Eastern European and Gipsy music. An important consideration of the selection is the protection of Gipsy music played by Roma people and that is why we invited performers such as Kesaj Tchave, who started their career in the Gipsy slums of Slovakia, or Sulukule of Istanbul who fight for the defense of their home. This year’s program features bands from Eastern Europe including great virtuosos of the region a such as Georgi Yanev, the best Bulgarian violin player and his band, Orpheus Orchestra, the long-awaited Romanian accordion virtuoso Ionica Minune and his band, Kaliarka, the Turkish master of clarinet, Selim Sesler and the bursting Macedonian brass band, Kocani Orkestar performing the last concert of the festival.

Like every year the best bands from Hungary will perform and interpret Olah Gipsy music in their own way such as Szilvási Gipsy Folk Band, Parno Graszt, Romano Drom, and the Athe Sam Csapat, established by the leaders of the most popular Gipsy bands during the Budapest Gipsy festival under the same name, as well as new formations like Pujara and Matilda & ROMengi ZOR.

Farkas Quartett a representative of Hungarian Gipsy music is also among the performers as well as “Kis Csipás” és Rekontra zenekar, offering the best of music from Kalotaszeg.

In the Roma Tent we can also meet Gipsy musicians who left their homeland and went to the west such as Traio Romano, a band of Romanian musicians living in France who have preserved the atmosphere of Gipsy parties in Transsylvania, or Adrian Gaspar GipsyCombo made of young and talented Gipsy musicians living in Vienna and mixing Bulgarian rhythms with jazz. We will have the chance to listen to the new albums of the Italian Acquaragia Drom and the Czech Terne Chave both released this year.

Another important performer is Vanessa i Sorba from Poland who play a kind of Gipsy music not far from that of their Russian neighbors, and the French band, La Caravane Passe presenting an imaginary Gipsy folklore mixing Balkan rhythms with Russian chansons and hip-hop insanity.

The program of the first day ends in a Gipsy ball where we can learn Slovakian and Romanian dances. The closing programs of the following days will be hosted by the best of Dj’s: Goulasch Exotica project from Budapest, the Swiss Gipsy Sound System featuring DJ Olga and Dr Schnapps, and the last day will be closed by DJ Tagada from the Gipsy Nights of Paris (Nuits Tsiganes